Sculls (hand movements used to propel the body) are the most essential part to synchronized swimming. Commonly used sculls include support scull, standard scull, torpedo scull, split-arm scull, barrel scull, and paddle scull. The support scull is used most often to support the body while a swimmer is performing upside down. Support scull is performed by holding the upper arms against the sides of the body and the lower arms at 90-degree angles to the body. The lower arms are then moved back and forth while maintaining the right angle. The resulting pressure against the hands allows the swimmer to hold their legs above water while swimming. Other sculls used in training include propeller and reverse propeller.

The "eggbeater kick" is another important skill of synchronized swimming. It is a form of treading water that allows for stability and height above the water while leaving the hands free to perform strokes. An average eggbeater height is usually around chest level. Using the eggbeater, swimmers can also perform "boosts", where they use their legs to momentarily propel themselves out of the water to their hips or higher. "Eggbeater" is also a common movement found in water polo as well as the "pop-up" movement. Eggbeating for a considerable period is also referred to as an "aquabob" and is used to build propulsion under water prior to a boost or pop-up. 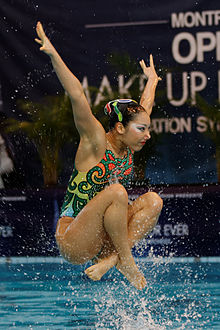 A member of the Japanese team is thrown up in the air during the team's free routine at the 2013 French Open.

A lift is when members of the team use their feet and legs to propel their teammates relatively high out of the water. They are quite common in routines of older age groups.

Parts of a successful lift

There are three parts to every lift in synchronized swimming: The top (or "flyer"), the base, and the pushers.

Jiang Tingting and Jiang Wenwen of China perform during the duet technical routine at the 2013 French Open.

There are hundreds of different regular positions that can be used to create seemingly infinite combinations. These are a few basic and commonly used ones:

Tub: Both legs are pulled up to the chest.

Routines are composed of "hybrids" (leg movements) and arm or stroke sections. They often incorporate lifts or throws, an impressive move in which a group of swimmers lift or throw another swimmer out of the water. Swimmers are synchronized both to each other and to the music. During a routine swimmers can never use the bottom of the pool for support, but rather depend on sculling motions with the arms, and eggbeater kick to keep afloat. After the performance, the swimmers are judged and scored on their performance based on technical merit and artistic impression. Technical skill, patterns, expression, and synchronization are all critical to achieving a high score.

Depending on the competition level, swimmers will perform a "technical" routine with predetermined elements that must be performed in a specific order. The technical routine acts as a replacement for the figure event, and is usually used only in senior and collegiate level meets. In addition to the technical routine, the swimmers will perform a longer "free" routine, which has no requirements and is a chance for the swimmers to get creative and innovative with their choreography.

The type of routine and competition level determines the length of routines. Routines typically last two and a half to five minutes long, the shortest being solos, with length added as the number of swimmers are increased (duets, trios, teams, and combos). Age and skill level are other important factors in determining the required routine length.

When performing routines in competition and practice, competitors wear a rubber noseclip to keep water from entering their nose when submerged. Some swimmers wear ear-plugs to keep the water out of their ears. Hair is worn in a bun and flavorless gelatin, Knox, is applied to keep hair in place; a decorative headpiece is bobby-pinned to the bun. Occasionally, swimmers wear custom-made swimming caps in place of their hair in buns.

Competitors wear custom swimsuits and headpieces, usually elaborately decorated with bright fabric and sequins to reflect the music to which they are swimming. The costume and music are not judged (but marks will be taken off if the headpiece falls off any swimmer while she is swimming the routine) but factor into the overall performance and "artistic impression." Heavy eye makeup is often worn to help portray the emotions involved with the routine; it helps to accentuate the eyes of each swimmer. (This makeup style is often the center of criticism and ridicule. Some argue that it shows a lack of taste and minimizes the athleticism of the sport. Other artistic sports, such as gymnastics and ice skating, do not employ the same makeup practices.)

A standard meet begins with the swimmers doing "figures", which are positions performed individually without music. All swimmers must compete wearing the standard black swimsuit and white swimcap, as well as goggles and a noseclip. Figures are performed in front of a panel of 5 judges who score individual swimmers from 1 to 10 (10 being the best). After the figure competition, the routines begin.